I’m officially signed up! The Storming of Thunder Ridge and the Garret County Gran Fondo two of the great centuries of 2019. I used them both as training rides for the Great Divide. Both have a ton of climbing, way more than a typical century, but while SOTR is a slow buildup, the GCGF has many very steep grades. The GCGF has something called the Diabolicle Double, which is a double metric with even more climbing. More than 16,000 feet. That would make it the toughest one-day ride I’ve yet attempted, even worse than any single day on the Divide. Wish me luck.

There is a lot I can say about this route, but today I’d just like to talk about it’s benefit as a training tool. In short, I’d like to start using it to build up distance.

I like using the W&OD to do personal centuries. I can hop on the trail right from my front door, and a there and back to Purcellville is about 90 miles. They’re not very interesting miles, but there is a kick-ass bakery at the end of the line, and sometimes you don’t need anything exciting, you just need to put on some miles. Nice math. But what if I want to go longer?

The C&O/GAP trail is long, about 325 miles and it has small towns and frequent camping spots all along the route. It’s gravel, but it’s easy gravel. Probably the biggest downside is mud. The thing is, if I want to do a certain distance greater than 100 miles, it’s pretty easy to set up. Harper’s Ferry is 60 miles out, for a 120 mile round trip. Shepherdstown is 73 miles away. And I can keep going basically as long as I need to go that day.

Yeah, this blog is about the GDMBR, but I have some things planned to get me in better shape than ever over the next year and a half. It’s not a stretch to say I’ll be preparing for the Divide in 2021. So I’m going to put some of those things up here, both ideas and actual events.

When we last left our heroes, Greg Smith was going to Texas to to live his awesome retired life. I was going back to Virginia to work for a cool company that does cool stuff. And I was going to see a heart doctor.

As many of you know, I’ve been seeing doctors for decades for my arrhythmias, and finally in 2018 I had a cryoablation to fix my AFib. But that ablation apparently did not fix (and was not designed to fix) a separate, hidden arrhythmia, Supraventricular Tachycardia (SVT). From previous conversations with my heart doctor, I was unsure if we’d ever have a chance to tackle it. Lots of unknowns. So I was surprised to hear my doctors say he had the information he needed to go for a fix now. He said, “Take your time and let me know if you’d like to pursue another ablation.” I took exactly zero seconds before telling him to sign me up.

From here, things moved very rapidly. My previous AFib cryoablation took months to set up. This one took just a few weeks. This was another ablation, but a different kind that was actually easier. Heck, they even woke me up during the procedure and I was able to feel an ablation in progress. It was interesting feeling having someone speed up, slow down, and eventually microwave (actually more like AM Radio, but they did burn that sucker) part of your heart. It was especially nice to have Emily, one of the nurses, be the voice in my head while I was awake, soothingly telling me what was going on and answering my questions. Textbook. Out of the hospital that same day.

So fast forward a week after the operation. Back on the bike. Three weeks. 80+ mile rides. Today. In my appointment today, my doctor says to do whatever the hell I want. Intervals, super long rides, he’s good with it. He even used a word that doctors basically never use. He said I’m “cured”. Let me break that down for you. AFib? I’m a whole lot better, but not cured. AFib gets more common as we age, and someone who went through cryoablation is apparently no exception. He said he doesn’t expect to see me back until at least some time in my 70s, maybe much longer, but there is a chance I’ll be eventually be back. But SVT, the condition I just had ablated? Apparently, when they fix that, they fix it good. If I end up coming back, it won’t be because the condition popped up again, it’ll be because someone screwed something up. If nobody screwed anything up, I won’t be back (except routine follow ups).

What does this mean for me and my cycling and the Great Divide (this is that kind of blog after all). Today, it means I lose a little more weight, I do more weightlifting, I do more intervals, and I take long rides. I basically do off-season building up to my strongest self ever. In the late winter and spring, I start riding some of the hardest events I’ve ever ridden, but they’re short. A day or three at most. I do these all year. Next winter, I once again go through a build phase and make myself even stronger. 2021, I attack the Divide again. How will that work? I’m not sure. Greg McFarland has some ideas that sound promising. It’s possible there might be some interest from Greg Smith, Dean and/or Chris. But I’m not done with this route. However it happens, I do intend to conquer this thing.

Oh man, this day’s description is totally no good without pics and video, but it was totally awesome and totally horrible. I would do the horrible again in a heartbeat in order to experience the awesome.

I’ll upload the vids and pics when I can, but in consolation, I’ll do a post on the earworms that have plagued us 🙂

In no particular order from various riders.

Hard day today. Lots of climbing, and I started out already tired from my last few days of solo travel. We did kick major butt, but I think I’m going to pay for it tomorrow. (I’ll add Strava view tomorrow)

One fun thing, we met some other GMDR riders today and had lunch with them. Notice the frame bags? Yep, that’s the DC flag. But it gets batter. Greg M. was talking to them about where they worked, and it turns out one of them works literally across the street from his office. If you have “It’s a small world” stuck in your head for the next hour, you’re welcome 🙂 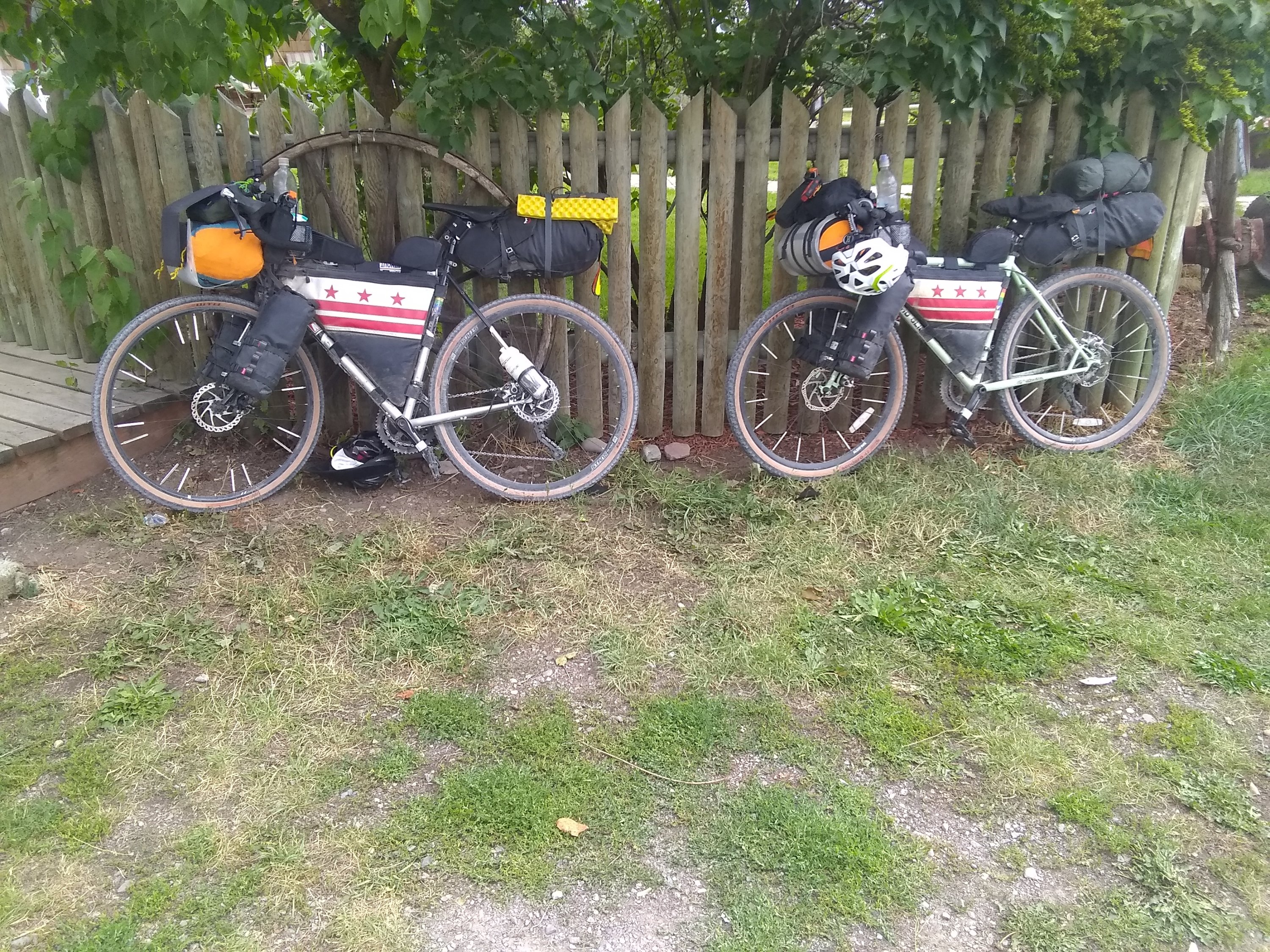 Haven’t had internet for the last couple nights, so no updates. I’m about to hop on the bike again, so I figures I’d leave you with just one pic. This is my camp site from the first night. The guy in the camper across the way is literally living off the grid, in camp sites year round. In the foreground, obviously, is my more humble abode. Back to the road 🙂 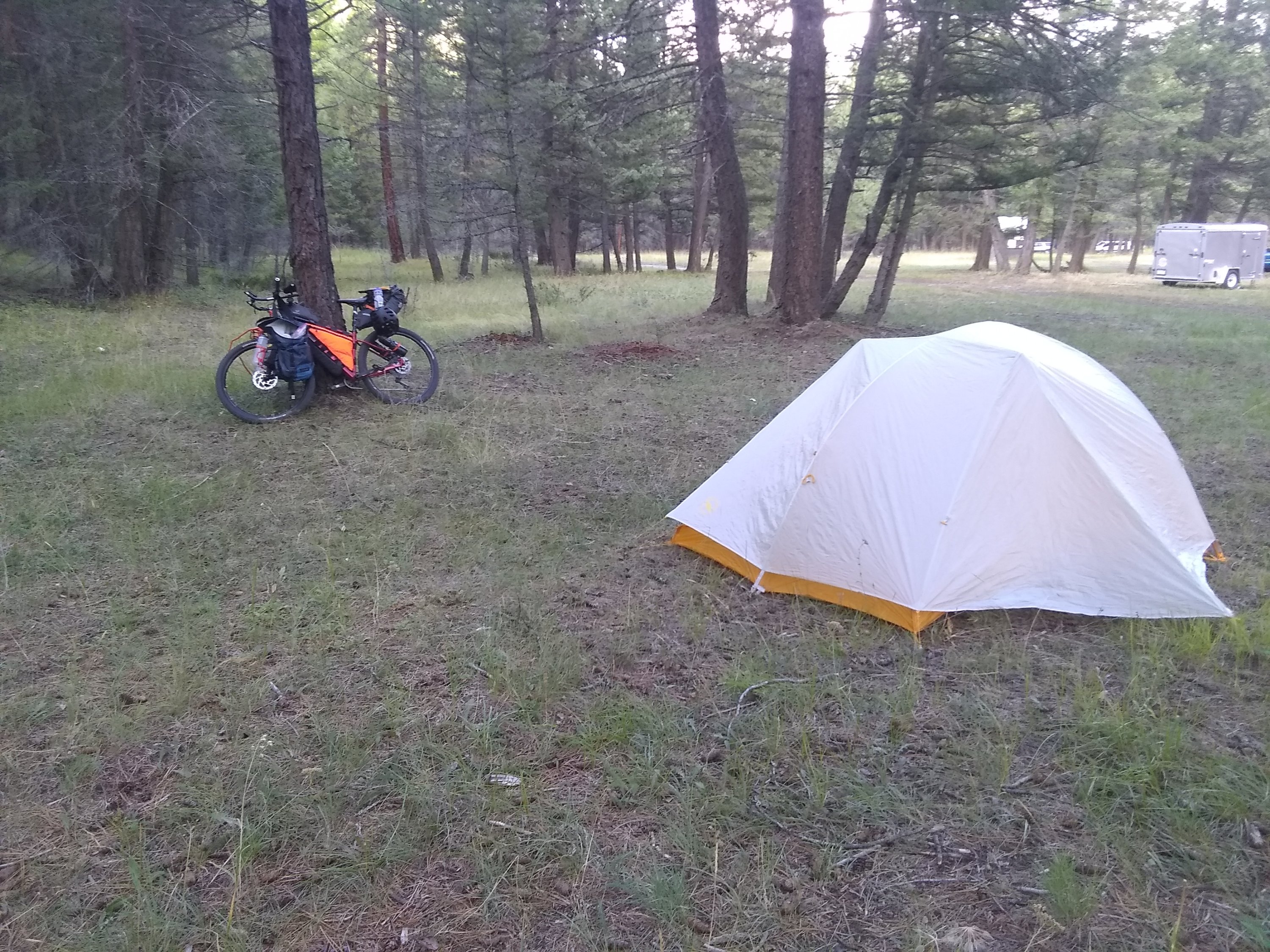 We’re actually only going to be riding in the U.S., so you can ignore the Canada part. But the rest of it? Yup.

In a couple of days we’re going to ride the Great Divide Mountain Bike Route (or GDMBR for those who prefer an unwieldy acronym to an unwieldy name). In short, we’ll be riding from Canada to Mexico. In long, well, it’s long. Like really long. We’ll be doing about 2,500 miles up to elevations of 10 thousand feet and a total amount of climbing equivalent to going up Everest many times over. And did I mention that nearly all of it is off-road, and away from cell towers? And we’ll need to filter our own water much of the way and carry enough gear to camp and cook meals and such? And we’ll need to carry bear spray for the occasional Grizzly? And we’re old! All of us are over 50, at least one is pushing 60, and, and our gear is heavy and, geeze, the TV has lots of great stuff on, so why are we even considering this?

I’ll let other people share their own answers to that question, but for me, it’s that I was asked. That’s all it took. My brother contacts me out of the blue and says, “hey, this looks pretty cool. Do you want to do this?” And I said, “yup.” Well, it was a little more complicated than that, but not as much as you might think. He had me at “this looks pretty cool.” Thanks bro. It’s all your fault. I hope you’re happy with yourself 🙂